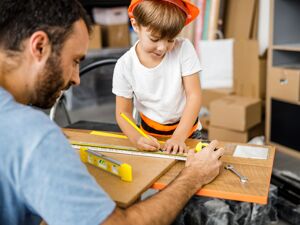 Our foundation, Triumph für Kinder (lit. “Triumph for Children”), has been supporting children in need since 1996 to give them positive experiences and with them little “triumphs”. Germany may be a rich country, but one in every five children is still poor. These children do not take it for granted that they will have a warm meal every day or breakfast before school or kindergarten. Many activities, ranging from going to the cinema to club sports to school trips, remain unaffordable for them. Child poverty therefore leads to social exclusion.

Poverty is multi-layered and not only material in nature. Even young children can sense that they are socially disadvantaged and excluded from the world around them. This is also apparent in kindergartens and schools. However, those who do not have the opportunity to receive an adequate education as a child will find it difficult to escape poverty as an adult. Our foundation therefore focuses on addressing the issue of early childhood education.

Our support on the ground reaches young and old alike

At our headquarters in Nuremberg, “Triumph für Kinder” supports a project in which educational mentors use their knowledge, free time and expertise to support children who are growing up suffering from educational hardship. This also gives refugee children, children in disadvantaged neighbourhoods and children in support centres better opportunities for education and employment.

We also started supporting the “Friends of Culture” initiative in Nuremberg in 2018. The more than 30 volunteers involved in the initiative are committed to imparting cultural values to kindergarten children. They accompany the children to museums, the theatre and concerts or take children and their parents on a voyage of discovery through Nuremberg's old town.

We have a long-standing support partnership with the “Bündnis für Familie” (lit. Family Alliance) initiative in Nuremberg. It focuses on family centres, which are day care centres that combine looking after and educating children with support services for families, with an emphasis on early childhood education.

The TA Foundation also works with the “Arbeitsprogramm gegen Kinderarmut” (Work Programme against Child Poverty). This initiative run by the city of Nuremberg gives disadvantaged children access to healthcare, school education, sports and a social life.

Facts and figures from the TA Foundation “Triumph für Kinder”

Headquarters and purpose
The TA Foundation is a public foundation under civil law with legal capacity, with its headquarters in Nuremberg. The purpose of the foundation is to provide sustainable funding and support for disadvantaged children and their families with an emphasis on early childhood education.

Inception
The TA Foundation was established in 1996 to mark the 100th anniversary of Triumph-Adler AG. It has borne the name “Triumph für Kinder” since 2009.

Foundation Supervisory Authority
The Foundation is subject to the supervision of the Government of Middle Franconia.

Tax status
The Foundation is recognised as a charitable and non-profit organisation by the Nuremberg Central Tax Office under tax number 241/111/01112.